Pulls Back in Choppy Trading


In the short term it looks like US dollar strength is becoming a bit of an issue for the Bitcoin market.

Bitcoin initially tried to rally during the trading session on Thursday but gave back the gains to slice through the $50,000 level again. In fact, we reached down towards the $48,000 level, and as a result now we are looking at the overall support level giving way as we could go down to the $45,000 level. The $45,000 level could be rather supportive, but if we were to break down below there, then it is likely that the market goes looking towards the $40,000 level. The $40,000 level was the previous resistance barrier that the market broke out from to get up to these levels.

As per usual, you will have to look at the $40,000 level as a “floor” in the market. The 50 day EMA is also reaching towards that area as well, so between the “market memory” and the round figure, I think that a lot of people will be interested in trying to pick up a bit of value in Bitcoin if we get down there. With the strengthening US dollar during the day, that could be a main driver for Bitcoin to fall, and then of course there is simple gravity that could come into play as well. Remember, the market had gotten way ahead of itself.

On the other hand, if we were to turn around, a breakout to the upside to clear the highs would be very possible. At that point time, is very likely that we could go looking towards the $60,000 level, which was what we attempted to do previously. A breakout above the $60,000 level could send this market into the next “buy-and-hold” parabolic move, but really at this point in time we need to see some type of pullback to make the market more stable so that people can hang on through the massive amount of fluctuation. The market continues to be one that is bullish, so I have no interest in shorting, but I do recognize that the best thing you can do is find some type of value in order to take advantage of what seems to be a longer-term cyclical trade. However, in the short term it looks like US dollar strength is becoming a bit of an issue for the Bitcoin market. In fact, we are also seeing that happen in other crypto currency markets such as Ethereum and Cardano. 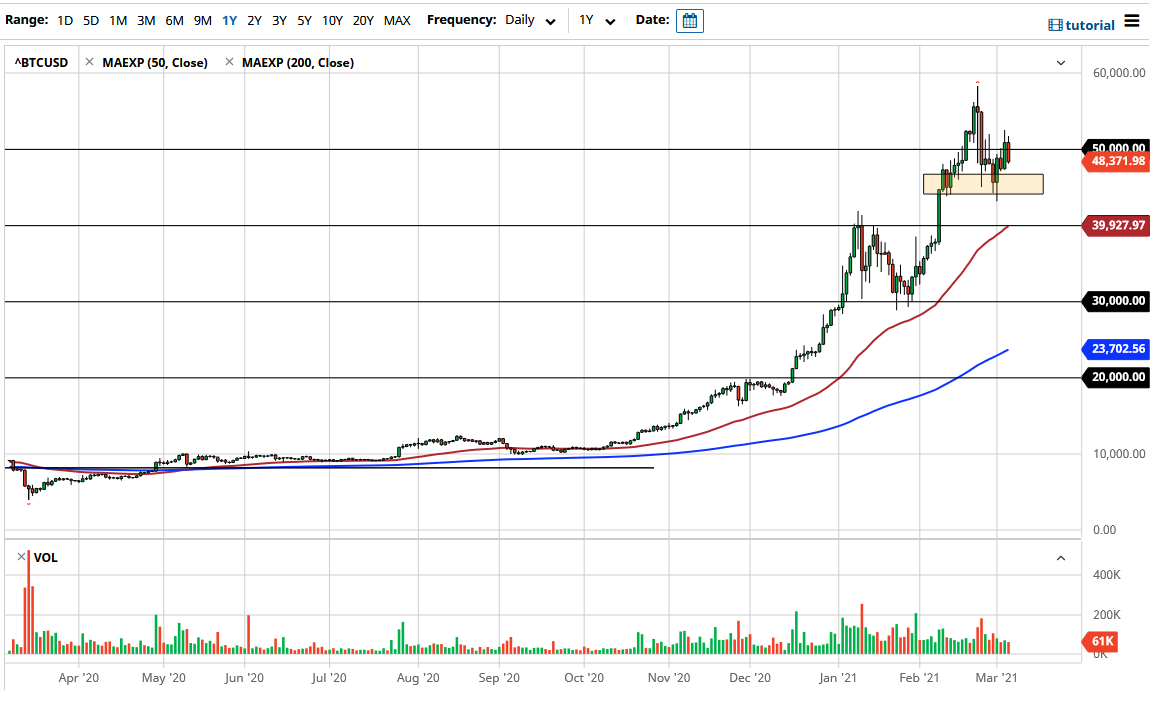 Read more:Pulls Back in Choppy Trading

What is a Dogecoin Worth?

What is a Dogecoin Worth?

One Doge = One Doge. At least that's what many in the Dogecoin community say and which seeks to make...

Major cryptocurrencies traded in the green on Thursday night at press time with Bitcoin (BTC) up nearly 4% and...

Will Miami’s bitcoin push pay off for residents? – Cities Today – Connecting the

Miami’s Mayor Francis Suarez has pledged to turn Miami into a hub for crypto-innovation and tech companies. From viral...