The world’s leading cryptocurrency has passed the half-way mark toward $100,000 and traditional investors are climbing on board.

Decrypt has recently reported that Bitcoin has reached 1.6 trillion in market capitalization reflecting its impressive run which brought it above the $52,000 mark this week.

Bitcoin’s recent performance has the attention of even the no-coiner investors — including private investing firm Motley Fool which just purchased $5 million in Bitcoin, just months after saying they would never invest in crypto. Another new entrant into the Bitcoin market is BlackRock, the largest asset manager in the world.

The reasoning is new investors are seeking a reliable safe-haven asset. Holding value is one function of a currency, though perhaps not the primary intended use of BTC according to its white paper.

It seems that Bitcoin’s gain is gold’s loss. Gold has been falling since July 2020, while Bitcoin has steadily risen, creating an all-time low in the gold-to-bitcoin ratio.

Bitcoin is unproven and lacks the long-term track record to support its usefulness as a safe haven asset. Gold has a 10,000-year history as a store of wealth, yet investors may be abandoning gold and climbing on board BTC based on the incredible run it has had since the end of 2020.

Clash of the Crypto Titans

Elon Musk has recently reclaimed the top spot on the Bloomberg Billionaires Index with a net worth of $199.99 billion.

Musk has moved BTC prices noticeably this year — causing a bump in prices when he added BTC to his Twitter profile and another increase when Tesla invested $1.5 billion in Bitcoin. Yet he claims he is not an investor and doesn’t own any publicly traded stock beyond Tesla. One wonders where he stores his wealth. His tweet would suggest he isn’t keeping it in USD or any other fiat.

Perhaps his coy tone is meant to downplay any suggestion that he is impacting markets with public statements that directly impact the value of what he is investing in. After all, don’t take the advice of one of the wealthiest individuals on Earth, he is not an investor — in publicly traded stocks. Which of course, does not include Bitcoin.

Musk has also shown some love of Dogecoin, notable as the meme coin that everyone took seriously anyway. Dogecoin’s all-time high is still less than $.09, with a total supply of over 128 billion coins. 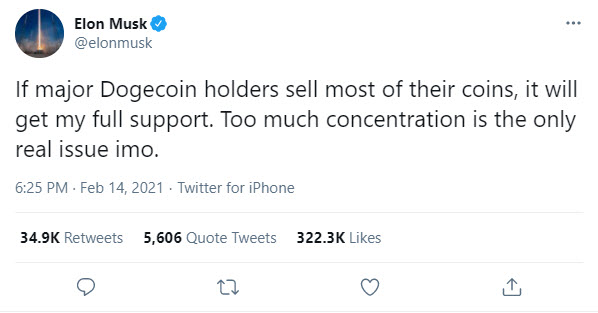 Binance founder Changpeng Zhao commented on Bloomberg Asia that he was surprised at Musk’s vocal support for Dogecoin. Zhao said in the interview:

“I’m surprised that Elon is so bg on Dogecoin. But this is the decentralized free world… He’s not really associated with Dogecoin in any way. The fact is Tesla bought Bitcoin not Dogecoin…” 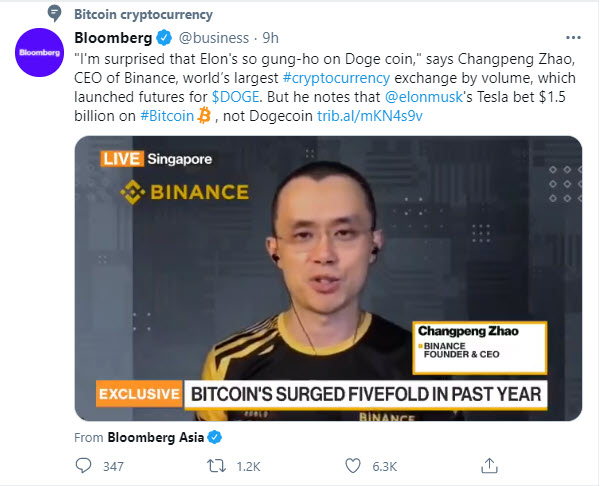 Musk was not shy to respond. He asserted that Tesla’s move to invest in BTC is not reflective of Musk’s own opinion. Though, Musk’s association with the company he co-founded and leads is fairly well known.

Investors have a lot to be thankful for over the past 11 months. Since hitting the bear market low...

TipRanks2 ‘Strong Buy’ Stocks With 7% Dividend YieldYou can get whiplash, trying to follow the market fluctuations these days....

The cryptocurrency market faced another day of downward pressure as the unease in the traditional markets continues to spread...

Bitcoin Has Tumbled More Than 20%. What to Make of Its Bear Market.

There is a bear market in Bitcoin.That’s right, Bitcoin, the upstart cryptocurrency that aspires to become a medium for...

Why Bitcoin Price Could Extend Its Decline To $41K, 100 SMA Holds The Key

Investing in bitcoin? Keep this in mind before selecting a crypto exchange

Bitcoin, Cash App, and E-Commerce Were the Big Highlights From Square’s Year-End

Confused about Bitcoin as I am? Some answers to your questions | Opinion

Bitcoin is an Alternative to Gold And Not a Currency, Says Bridgewater Analyst